Recently. I was reminded of something that I said last year when Yunia Funes-Mata, the owner of Tamales Olmeca, who sells some of the best artisan-style tamales in LA via her pop-up, tagged me in a post of hers.

Growing up in a suburb of Los Angeles, my family regularly took part in a tamalada, a party where friends and family come together and make massive amounts of tamales. Hundreds, in fact, although by the end they’re all in different shapes and sizes, because, let’s face it, when you have that many people making tamales, quality control isn’t always the highest priority.

It’s a great time to imbibe a glass of wine or tequila in fellowship, and catch up on what’s going in each others lives. A convivial atmosphere that’s felt by all. 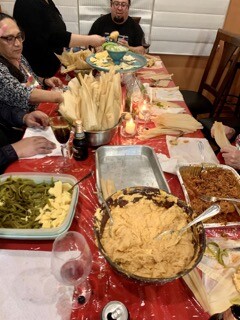 The tamale making party: be prepared to work

At some point in the evening, after going somewhat stir crazy from the amount of work, a few members of the group might break out into song, as the room fills with slightly drunken bellows of the Los Lobos’ cover of the song Volver Volver.

This year, our group procured 100 pounds of masa, resulting in all 20 of us taking home a few Ziploc bags each full of our handcrafted work.

The tamales we make are traditionally Mexican, the type that are found everywhere throughout the Southland at this time of year. Made with masa preparada, they’re filled with either red pork or beef or green peppers and cheese, then wrapped with a dried corn husk and steamed.

At this point, my family has been eating these tamales for the better part of our lives. However, that doesn’t stop my mom from also grabbing a couple of dozen from La Moderna Bakery in Whittier, known for being some of the best in all of LA and, for that reason, they sell out extremely quickly, with no exceptions.

At some point, I got spoiled about tamales and started to wonder what else was out there. As I took a more substantial interest in food, my mind began to wander, and I began to be fascinated by different types of tamales, especially ones that I didn’t grow up with. I got more familiar with Central and South American versions when my mother would bring home tamales from her end-of-year holiday class parties from the ESL courses she taught at the local community college. 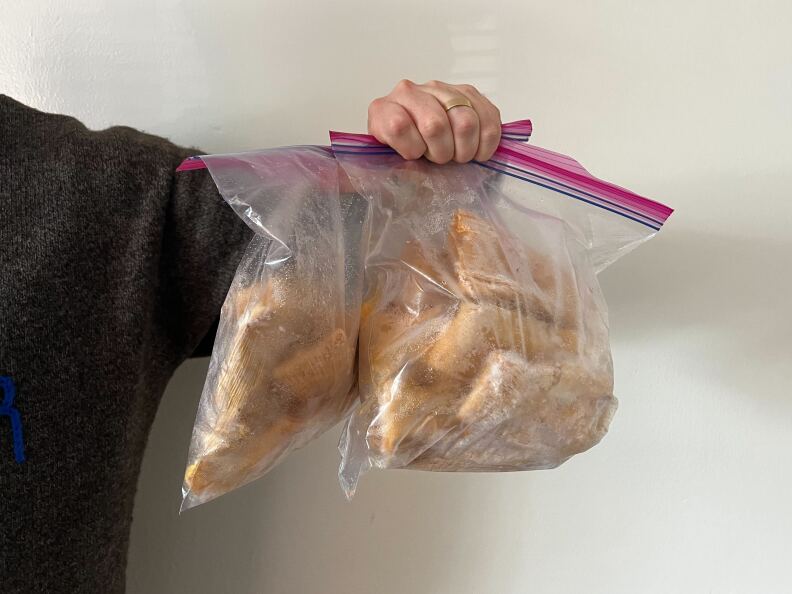 It was my first time trying Guatemalan and El Salvadorian tamales, and later learning about the different leaf-wrapped varieties from other countries, such as the Chinese Lo mai gai, a heavenly combination of sticky rice, chicken, pork, and shiitake mushrooms wrapped in a lotus leaf. It’s a classic dim sum dish I also love to eat any time of year.

Throughout my time, I’ve realized that we, as residents of Los Angeles, are extremely privileged to have access to a wide variety of tamales and tamale-like creations from all around the world. We owe it ourselves to try a few that we might be unfamiliar with. Here are some which have been among my favorites in recent memory: Located in the city of Cypress, you’ll find Señor Big Ed, a tiny restaurant space that’s been serving Mexican and Puerto Rican food since 1982. Almost 20 years ago, however, Yolanda and Javier Coronado, along with their daughter Veronica, began devoting a significant part of their menu to the food of Puerto Rico.

Around the holiday, Señor Big Ed’s includes pasteles on the menu, the Puerto Rican version of a tamale. It’s made with a masa from green plantains and yautía, which is a starchy root vegetable found in African, South American, and Caribbean cuisines. It’s a softer, moister masa, dark in color with a looser consistency. It’s filled with pork with adobo sauce, wrapped in banana leaf and then boiled instead of steamed.

The velvet-like texture of the masa and pork filling melts in your mouth. And since the pasteles are boiled in the banana leaf, the masa takes on the aromatics of the leaf as part of the flavor.

Enjoy your pasteles along with a side of arroz con gandules (seasoned rice mixed with pigeon peas) and maduros (sweet fried plantains), both Puerto Rican staples.

The combination of the starch-heavy flavors of the pastele dance a salsa across your palette with the spiced pegao (gummy texture) of the rice, stacked with the deep caramelized flavor of the plantains, plus a few drops of pique (vinegar-based Puerto Rican hot sauce). It’s an experience that gives aa great representation of the island’s wonderful flavors.

While you can order by the dozen at Señor Big Ed, if you decide to enjoy your meal in the small dining room, you’ll find yourself taking in the beauty of a mural of El Moro, the over 500-year-old fortress left by the Spanish, while bachata music wafts through the air. You could argue that El Morro serves as a symbol of perseverance for a nation that continues to battle hardship but still manages to maintain culturally relevant as ever.

Mayra Soto, the owner of Tacoz in the city of Lynwood, came up with the name of her small taqueria-style restaurant because she only wanted to sell tacos. Initially, the main draw was her carnitas, which are made estilo Michoacan, the Mexican state where Soto was born and where her parents are from. Originally hailing from a small town called Tepalcatepec, in the southwestern Tierra Caliente region of the state, they eventually ended up in South Gate. After having a bite of the carnitas, it’s easy to know why they are a specialty dish for Soto, who runs the restaurant with her husband. Because of the regional take on her carnitas, customers who were fans — and also had connections to the state of Michoacan — began to flock to her restaurant. When they started to inquire if she made any other dishes specific to the region, she began including uchepos on the menu, a sweet corn tamal, containing a coarser consistency of masa, no filling, and wrapped in a green corn husk as opposed to the dried husk used in the traditional Mexican tamal. Soto mentions the sweet taste as being one of her favorite features of the dish, even going as far to say it’s great follow up after a couple of tacos, similar to a dessert.

This year Soto included a new item to her menu, corundas, which has caused the restaurant to go viral on Instagram and Tik Tok. Different in size and shape to the typical longer rectangular tamal, it’s more of a small three-dimensional triangle, wrapped in a long corn leaf, or milpa, as it’s known in Spanish. Corundas require being wrapped in the milpa or corn leaf

The scarcity appeal of the corunda is partly because of the milpa. Soto says it was the most challenging ingredient to source, and she spent a lot of the time googling nearby corn fields to see who had it. She finally came across someone who was selling the leaves and purchased the whole lot. (She’s reluctant to divulge where exactly she found it).

The leaves themselves are only available during the months of May to November. and can only be grown under warmer conditions, making it a seasonally specific dish. Once this last batch is gone, it’s gone until next year.

The corundas are served with Mexican cream and salsa tomato, a smooth tomato-based sauce similar to that you’d find on a red enchilada, and placed in a medium-sized deli container to be eaten with a spoon, similar to a soup. You break up the masa and mix it all together, making for remarkable mouthfuls of flavors and textures that fill you up, both in nourishment and contentment.

Eder Rivas, who grew up in the city of Fullerton, had always felt he was in the minority, both from being El Salvadoran and coming from Orange County. Having grown up away from the central area of ​​Los Angeles, which houses the largest population of El Salvadorans, he would always have to drive far when he was hungry and wanted to eat the food of his people. But while some might consider these to be major obstacles, Rivas used his outsider status to find his superpowers. He began his culinary journey cooking the cuisine of El Salvador as a catering operation with his wife Stephanie, before graduating to aa pop-up food truck. The couple’s menu features exquisitely griddled pupusas made with fresh masa, which are always made by hand.

The couple have now made it their mission to position themselves as ambassadors of El Salvador, not simply for its cooking, but for the culture as a whole. Given it’s the holidays, What’s That You’re Cookin’ is offering his El Salvadoran tamales, a facsimile of the tamal Rivas grew up eating.

Not spicy in flavor, as you might come across with others, instead it centers its flavors on savory elements, such as stock and lard, which are added to the masa and cooked for an hour before forming the tamales. It’s then mixed with a protein of choice; the day I was there, Rivas was using chicken, mixed with a sauce made from tomato, onions, pepper and various spices, combined with green olive, potato, and bell pepper, and wrapped into a banana leaf and steamed for an hour to ensure the level of doneness. All the recipes that the couple make on their food truck originate from Eder’s grandparents. To him, it’s a way to pay homage to what he learned about his culture when he was growing up, a culture that survived aa civil war lasting from the late 70s to the early 90s, resulting in large swaths of the Salvadoran population coming to the United States.

Despite the history of hardship the Rivas believes the country’s food is a delicacy in its own right, and deserves to be celebrated as a form of art.

Do you have a question about food in LA — or something you want to tell us about?

Gab Chabrán reports and edits stories about food and its place in LA’s diverse cultures and communities. Curious about a specific regional cuisine or have a recommendation for a hole-in-the-wall you love? Are you looking for the best place to take your kid for lunch? We’d love to hear from you. Drop us a line.