The legal battle is on between K-pop group OMEGA X and their entertainment company, Spire Entertainment.

Video evidence was published online from a fan who witnessed the company’s CEO verbally abusing the members after the last stop of the US tour in Los Angeles on October 22.

The video shows the CEO yelling at the group’s leader Jaehan who is not feeling well and close to passing out.

After that, the group’s social media accounts went silent.

Problems between the group and company grew after the company canceled the members’ flights back to South Korea, forcing them to pay for the flights with the help of friends and family.

Once back in Korea, the company issued a statement saying:

“Hello, this is Spire Entertainment.

“First of all, we deeply apologize to all OMEGA X members, families, fans, and everyone whose feelings were hurt by an unfortunate event that has happened recently.

“Spire Entertainment takes full responsibility and announces that the CEO who’s responsible for this matter has resigned. We’d also like to apologize for not responding well and disappointing many fans with inadequate response to the situation.

“We will take in all your advice and comments to do our best to prevent this kind of thing from happening again and focus on providing a better environment for the members so that they can focus only on the artists’ activities. Please continue supporting OMEGA X , and we promise to try our best to be back with better news.”

Fans remained skeptical of the statement about the CEO resigning due to the fact that her husband is also the chairman of the company.

One Nov. 11, Korean news outlet SBS News released details stating the CEO forced the members to perform after testing positive for COVID-19, telling the members, “Steel yourselves mentally and go on stage.”

This was followed by allegations of sexual abuse against the company’s CEO.

The members, who had not been able to communicate with fans using their official accounts, made their own Instagram on Nov. 6 which has gained over 100,000 followers.

Their first post shows the group member’s hands together with the caption:

“We’ve created this small space of communication to convey the current situation through words of thanks to the fans who love us and to those who support us, and through our mouths as the parties involved in the incident.

“Under the pressure of Spire Entertainment, the members signed a memorandum saying, ‘If we upload SNS without consulting the company, we will take civil and criminal responsibility.’ We wanted to resume communication with our fans as soon as possible until we settled our position on Spire Entertainment, but we ask for your understanding.

“Since starting our group activities, we have had happy times, but we also had to go through painful times. And when what we were going through became known to the world this time, we were worried that what we’ve achieved so far would go up in smoke.But now we have put our fears behind us and decided to be brave together.

“Our group was the second opportunity for the eleven members who gathered through a time of setbacks to not give up on their dreams. The only driving force that allowed us to challenge our dreams without giving up was our fans who waited, trusted, and supported There were days when we were treated unfairly by the agency to the point where we wanted to cry, but remembering the cheers from the fans, watching the cheering messages, and sleeping were the only strengths that kept us going.

“From now on, we will continue to chase toward our dream to the end just as we always have. We will stand in front of our fans again with good music and performances. The eleven members with the same goal and the fans with the same dreams as ours are the most precious things in our world that we don’t want to lose again.

“Many people have been worried and waiting, and we apologize for the delay. Thank you for reading to the end the sincere words we have said with courage.”

It was announced to Korean media on Nov. 14 that the group had filed for a trademark of the name OMEGA X, alongside their fandom name “FOR X”, and “PROTECT OMEGA X”, which has been the hashtag trending by fans on social media.

On Nov. 16 at the Seoul Bar Association’s Human Rights Room, the members held a press conference with their lawyers. 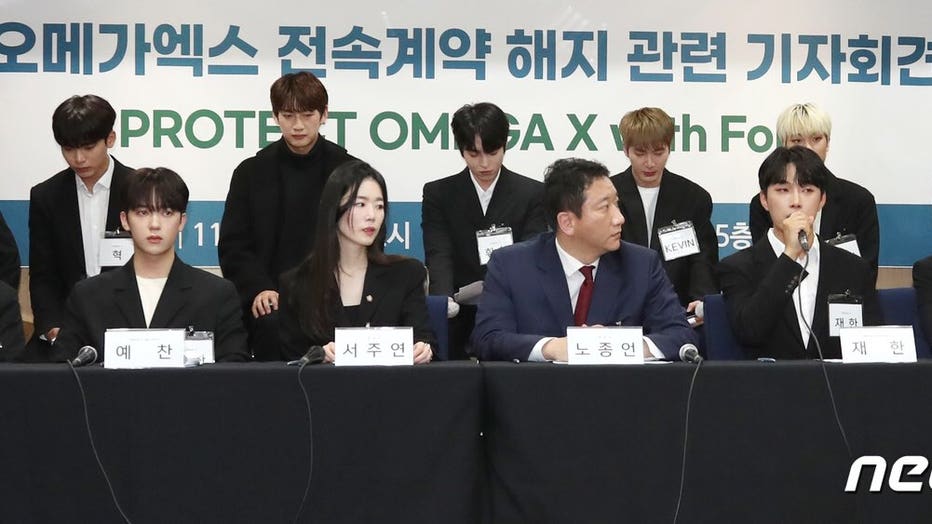 Legal representation alongside the members state, “We will proceed with pressing charges against the former CEO for threatening, assaulting, and exploiting the members. First, we apply for nullifying the exclusive contract for OMEGA X’s activities.”

Speaking about the abuse they experienced, leader Jaehan said, “She would threaten us that we should ‘grovel’ if we wanted to remain as OMEGA X and that she would either kill us or kill herself if we didn’t.”

Stories continued from the members.

“When we refused to go to drinks, the company CEO threatened us that there will be no next album and forced us to get drunk,” says member Sebin.

The youngest member, Yechan, talks about the tour stop in Los Angeles, where the initial video of abuse was taken.

“On the day of the verbal and physical assault that took place at the end of our tour, we locked ourselves in our hotel and tried to hide. We asked the hotel to separate us from the company and protect ourselves until the moment we left the country,” he says.

The group, most of whom were former members of groups that have disbanded, state that they put up with the abuse so they wouldn’t have to give fans news of yet another disbandment.

Member Taedong said, “I’m sure not all agencies are like this, but I believe that many hopeful K-pop trainees and even active K-pop singers are being mistreated and exploited. I used to practice for 15 to 17 hours every day in my last agency without a day off.”

He continued, “They took my phone and demanded my passcode. Verbal and physical abuse also took place at my last agency.”

Member Hangyeom states that while he was not affected by physical abuse at his previous company, that other members were.

“We promise to never give up chasing our dreams, as long as you, FOR X are with us,” Yechan says.

Junghoon closes by thanking fans for support that they have seen online in the weeks since news broke of the abuse. “I want to say we are really proud of you, FOR X. The hashtag PROTECT OMEGA X that you all made helped us be better through this bad situation, so I’m really thankful for that and I promise we will never give up. Thank you so much, FOR X.”

This is a developing story.