Here in LA, where we have beloved neighborhoods like Koreatown, Thai Town, Little Tokyo, and Historic Filipinotown, we celebrate AAPI Heritage all year long, with frequent reminders of the countless contributions that these communities have made not just to our city, but also our country and across the globe. That said, we’ll take any opportunity to support our local AAPI communities, and AAPI Heritage Month offers plenty, with a slate of events happening throughout May, ranging from food-focused pop-ups to art exhibitions and more. Rather than be overwhelmed by the options around town, we’ve rounded up some of our favorite events in this convenient guide: 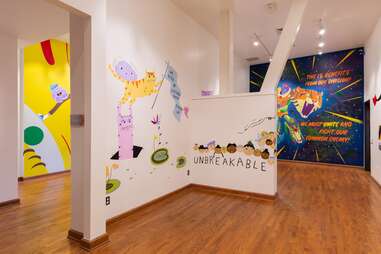 All month
Chinese American Museum, Downtown
Downtown’s Chinese American Museum, located in a beautiful brick building that’s part of El Pueblo de Los Angeles Historical Monument, will be hosting exhibits and events every month. First on the docket is a walking tour of Chinatown’s murals to pair with their exhibition of Asian-American artists called “Collective Resilience.” Later in the month they will host the first live and in-person piece in their ongoing series “An Untold Past,” a panel discussion about the many Chinatowns throughout LA history. 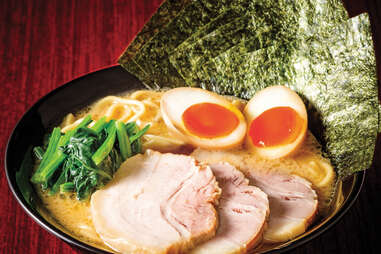 Weekends starting May 6 through July 31
Japan House, Hollywood
Japan House is always hosting cultural events and exhibitions about Japanese history and cuisine, but May kicks off “Ramen Discoveries,” a series spotlighting seven regional ramen styles over 14 weeks, which pairs perfectly with the hub’s recently launched “Art of the Ramen Bowl” exhibition. The month of May is split between Tokyo-style Miso Ramen from Tsujita Miso no Sho, followed by a rich and pork-driven style by Keika, which comes from Kumamoto on Japan’s southern island of Kyushu.

Wine and Cheeseburger: Harley and Lara Pair Falafel with Wine 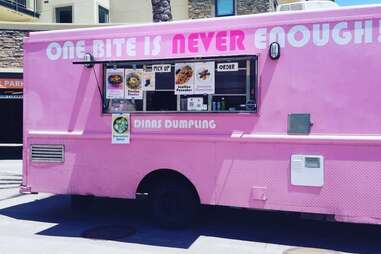 Saturday, May 7th
Vincent Lugo Park, San Gabriel
Compassion in SGV is an all-volunteer organization dedicated to making sure SGV residents get around safely without threats or harassment, chaperoning locals as they walk to or from transit or close their businesses after dark. On Saturday the 7th, they’re also holding a rally and block party to foster community and engagement in the SGV. There will be lion dancers, music, and speakers. Of course there will be food too, including Indonesian from the Satay Lisa Truck, Dina’s Dumpling, ube crinkle cookies from Butter-Lab, and more. 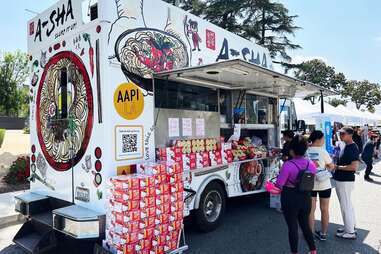 Saturday, May 7; Sunday, May 22; and Saturday, May 28
Woodland Hills, Downtown, and Chinatown
Taiwanese company A-Sha makes some of the best and most reliable packaged dry noodles you’ll find on market shelves, but for AAPI Heritage Month they’ve partnered with the city of LA’s AAPI-LA initiative to bring their noodles to the streets in a food truck, which will make several stops around LA throughout the month. The focus is on their air-dried noodles, but they’ll be serving them with all sorts of toppings, including their Hello Kitty collab Chicken Noodle Soup, and some with marinated pork, green onions, and chiles. Catch the truck Saturday, May 7 at the Valley Asian Cultural Festival; Sunday, May 22 at Smorgasburg (more on that below); and Saturday, May 28 at Steep LA for a charity pop-up. 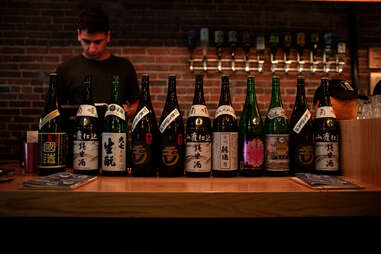 Tuesday, May 10th
Ototo, Echo Park
Echo Park sake bar OTOTO is hosting six sake brewers from Japan for its first-ever Brewer Block Party on Tuesday, May 10 from 5:30–7:30 pm. Each brewer will be pouring their best sake, which will be served alongside a selection of snacks including Mini Chicken Katsu Sandos, Gobo Chips, and Curried Crab Salad. One $60 ticket includes pours of up to 12 different bottlings as well as snacks during the two-hour party. Sake bottles will be available for purchase and after the block party, OTOTO will remain open until 10 pm with their regular menu available. The sake breweries featured include Mioya Shuzo, Yamada Shoten, Rihaku, Kawatsuru, Tentaka, and Chiyonosono. 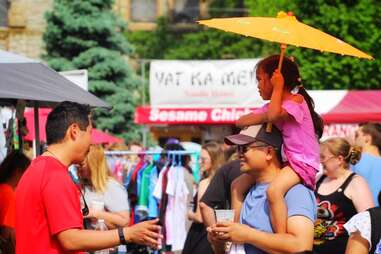 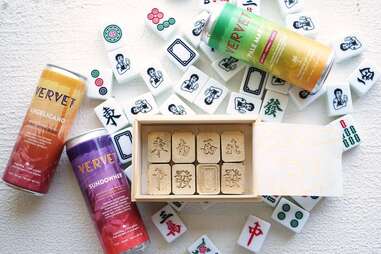 Saturday, May 14
RiceBox, Downtown LA
RiceBox is dedicated to serving and celebrating classic Cantonese barbecue, and for AAPI Heritage Month they’re celebrating the classic Chinese game Mahjong. They’re also bringing in fellow Asian-American-owned businesses Vervet and Go Cakes, so there will be artisanal cocktails and ornate desserts like Praline Bon Bons too. The Mahjong sets have been custom made for RiceBox, chefs Leo and Lydia Lee will debut some new RiceBox specials, and a portion of the proceeds will go to the Stop AAPI Hate coalition. 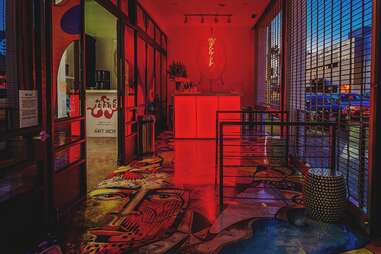 Opening Friday, May 20, through Sunday, June 26
LAAB/West Hollywood
The Filipino art and culture community is strong and diverse, covering every discipline and representing so many unique experiences both in the US and in the Philippines. The West Hollywood cultural space The LA Art Box—The LAAB for short—has partnered with San Francisco-based Parangal Dance Company, an organization focused on the preservation of Philippine culture through dance and education, to put on a new show called “Belonging. ” The show will feature photographs of Parangal members performing traditional dances from the six indigenous peoples of the Philippines, and it will also highlight eight contemporary Filipino-American artists from many disciplines. There will be exhibits of music, film production, fashion, food, and more, to build a whole multisensory experience, a celebration of Philippine culture past, present, and future.

Sunday, May 22
The Museum of the San Fernando Valley, Northridge
Deep in the Valley, the SFV Museum is reintroducing their live events with an AAPI Cultural Festival. There will be food trucks, vendors, art workshops for kids, and onstage entertainment in addition to the ability to tour the museum itself. In the evening, there will also be a free screening of “A Shot Through The Wall,” a film by Aimee Long, with a community discussion to follow. The event is free, but tickets are required for the film. 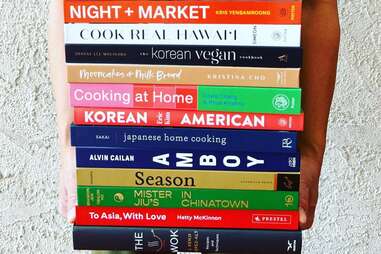 Every month
The best cookbook store in LA stocks a fantastic selection from Asian, Asian American, and Pacific Islander authors, and for the month of May they’ve collected their favorites in one convenient collection. They have books from LA-based chefs like Alvin Cailan, Margarita Manzke, Kris Yenbamroong, and Sonoko Sakai, among others. Now Serving’s owners Ken Concepcion and Michelle Mungcal, Filipino American themselves, put on some of the best events around, and they will be adding them to the calendar all month. 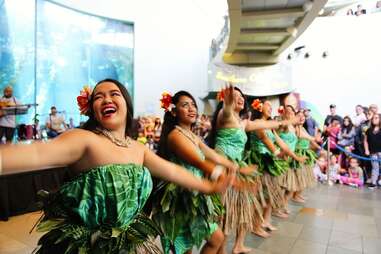 Saturday, June 4 – Sunday, June 5
Aquarium of the Pacific/Long Beach
This event misses the end of the month by a few days, but it’s just more proof that Angelenos don’t need a hard deadline to celebrate AAPI heritage, culture, and cuisine. The Pacific Islander Festival is returning to Aquarium of the Pacific for its 19th year, after going virtual for the last couple of iterations. Details are still being finalized, but previous years have included music and dance, educational talks, demonstrations, and food from Pacific Island cultures including Hawaiian, Tahitian, Samoan, Tongan, Chamorro, Marshallese, and Maori cuisines.

Sunday, May 22
Smorgasburg/Downtown LA
There is no shortage of AAPI vendors on a regular Sunday at Downtown’s Smorgasburg pop-up market, but on May 22, there will be a whole lot more of them. AAPI-LA is bringing a ton of vendors serving things like sushi, dumplings, and mochi donuts, as well as packaged snacks, sauces, and drinks. There will also be another appearance by the A-Sha Noodle truck, and collaborations with vendors like Saucy Chick, along with other fun stuff.

Ben Mesirow is an Echo Park native who writes TV, fiction, food, and sports. At one time or another, his writing has appeared in The LA Times, Litro, McSweeney’s Internet Tendency, Los Angeles Magazine, and scratched into dozens of desks at Walter Reed Middle School.