Flying into Los Angeles and looking down on the vast, sprawling city, it becomes obvious that this is not a place to be taken lightly. The world knows that L.A. is one BIG place, with snarled traffic to match, but did you know it actually encompasses 472 square miles? And that’s just the city; Los Angeles County covers more than 4,000 square miles! So what’s a tourist to do, when visiting the place where Hollywood was born, surfing is king and Mars explorations originate (at Jet Propulsion Laboratory in Pasadena)?

Make a driving plan before you begin, for many of the city’s top sightseeing attractions are – obviously – some distance apart. So visit Hollywood and the movie studios on one day, Venice Beach and Beverly Hills another. Plan to spend most of a day downtown, where the city first began way back in 1781. Downtown L.A. is in the midst of a Renaissance revival as well, as iconic structures like the Walt Disney Concert Hall, the Cathedral of Our Lady of the Angels and the Crypto.com Arena are joined by numerous new galleries, shops and condominiums, as Angelenos rediscover the joys of living in an action-packed part of town. And once you’ve checked off all of these top sightseeing spots, plan to do ten more – places like Malibu, the Museum Miracle Mile and Manhattan Beach – for this city is too vast to be held at just ten!

Rodeo Drive needs no description, as it is certainly the most famous shopping street in the world, thanks to Hollywood. So many movies have filmed scenes here it is too hard to count; but as the ultra-luxe shops come and go, one thing remains the same: this is the Beverly Hills spot where money rules. Bring plenty of it when you enter Tiffany’s, Van Cleef & Arpels, Bulgari or Cartier to buy jewels; you’ll need deep pockets at Chanel, Valentino, Balenciaga or Prada, too. If the street’s shops are too pricey for your budget, never fear; for the people watching here and in all of Beverly Hills is worth a visit. And you never know when a famous star will stroll past.

Recommended for Sightseeing because: A must-see stop in Los Angeles, Rodeo Drive is the ultimate shopping street. Head north to see some fabulous Beverly Hills mansions, too.

Jenny’s expert tip: Find metered parking in the lots located between Santa Monica Boulevard and Little Santa Monica; go to the downstairs level of the two-story lots to find the most spaces. 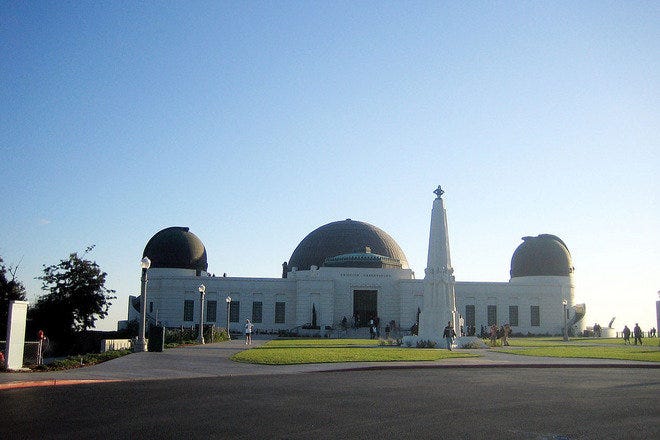 Since 1935, the Griffith Observatory has been wowing kids and adults with fantastic views of the city outside and engrossing programs inside. The Samuel Oschin Planetarium offers tickets to three exciting shows that take viewers into the solar system and around the world – Centered in the Universe, Water is Life and Light of the Valkyries. Be on the lookout for special events and shows at the Leonard Nimoy Event Horizon presentation theater, which presents “The Once and Future Griffith Observatory” film every day. Be sure to check out the Solar System Lawn Model, get a look through one of the telescopes (expect to line up a chance at those) and enjoy the displays in the Wilder and Ahmanson exhibit halls.

Recommended for Sightseeing because: Day or night, the Griffith Observatory offers spectacular views of the whole city, as well as up-close looks at the stars above.

Jenny’s expert tip: Go for the free Public Star Party held one Saturday each month to see the sky through massive telescopes with guidance from knowledgeable astronomers. 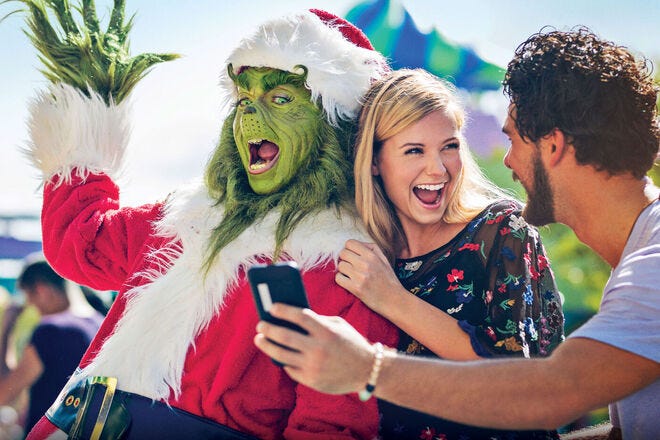 Universal Studios is the real thing, a working movie studio that also happens to have a theme park attached to it. Which means visitors get the chance to go right onto the lot to see where some of their favorite movies and television shows are made – think the “Psycho” house, the “Desperate Housewives” neighborhood, the “Back to the Future” town square and much more. Take the Studio Tour for real insights into how Hollywood really works. Stay for the rest of the rides there too, or move on to do special VIP tours at Warner Bros. studio and Paramount Pictures as well.

Recommended for Sightseeing because: A real working studio, Universal’s tour gives you an inside look at how movies are made. Do the Warner Bros., Paramount and Sony tours, too.

Jenny’s expert tip: Go behind the scenes at on tours at Warner Bros., Paramount and Sony studios as well as Universal for a real sightseeing treat. 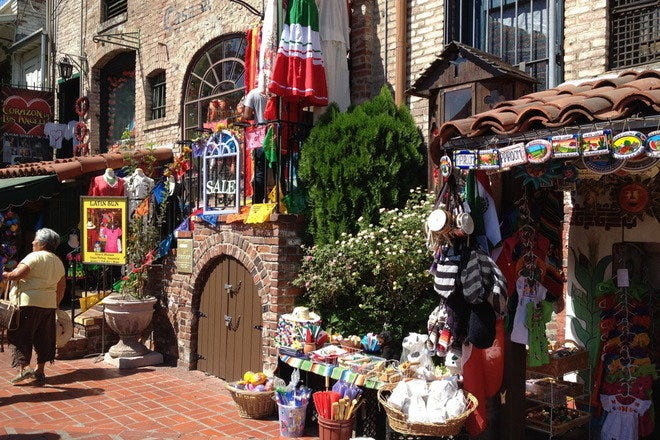 El Pueblo de Los Angeles Historical Monument is near the site of the early Los Angeles pueblo (town) where forty-four settlers of Native American, African and European heritage arrived after a journey of more than 1,000 miles across the desert from present-day northern Mexico. They established a farming community in September 1781. The 44-acre El Pueblo area in downtown L.A. is now a living museum that continues to fulfill its unique role as the historic and symbolic heart of the city, reflecting the diverse cultures – Native American, African American, Spanish, Anglo, Mexican, Chinese, Italian and French – that all contributed to the early history of Los Angeles. Visit the museums and other sites to immerse yourself in a long-past, yet still fascinating, world.

Recommended for Sightseeing because: Los Angeles began here; now it is a central sight in the downtown area and a captivating place where history and culture collide.

Jenny’s expert tip: Take a free guided tour Tuesday through Saturday at 10:00 a.m., 11:00 a.m. and noon, starting at the Las Angelitas del Pueblo office, located next to the Old Plaza Firehouse on the southeast end of the Plaza. 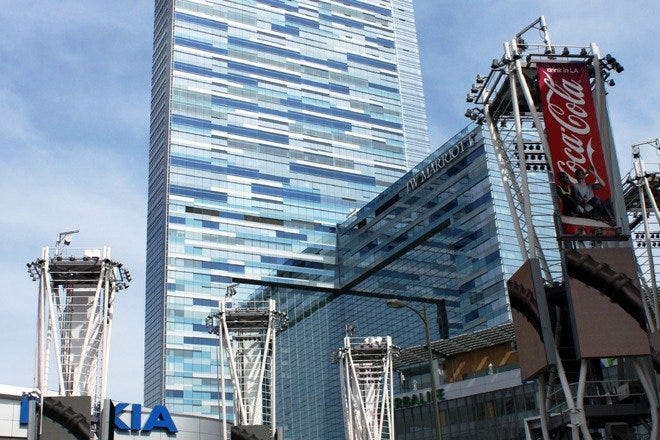 For a look at what’s happening in downtown Los Angeles, there’s no better place to visit than L.A. Live. It’s the center of the action, with the Crypto.com Arena across the street, the Microsoft Theater right on the central plaza, the Grammy Museum on the east end and plenty of restaurants, clubs and movie theaters in between. It’s the place where tourists will often run into an over-the-top movie premiere (think everything from the “Twilight” films to “Justin Bieber’s Believe,” as well as red carpets for the Grammy, Emmy and People’s Choice awards. There’s always something happening at L.A. Live!

Recommended for Sightseeing because: The center of the action in downtown Los Angeles, see L.A. Live as well as the Crypto.com Arena, the Microsoft Theater and the Grammy Museum.

Jenny’s expert tip: Park in the lots that are just north of Olympic Boulevard, they are usually half the price of the structures right at L.A. Live. 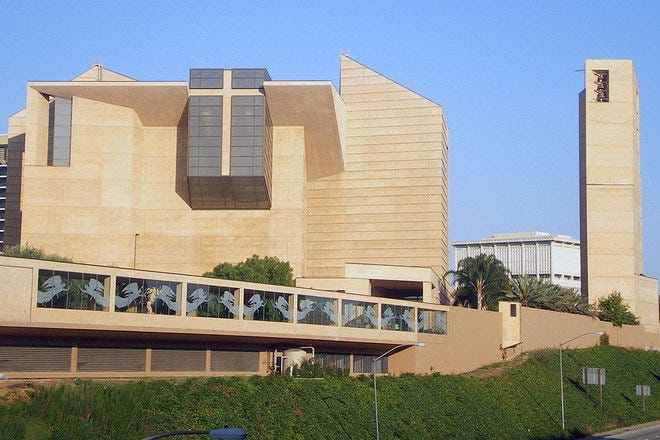 The Cathedral of Our Lady of the Angels is a relatively new addition to the landscape of downtown Los Angeles. Completed in 2002, the modern structure designed by Spanish architect Jose Rafael Moneo is built with architectural concrete designed to mimic adobe – and to last for 500 years. The massive bronze doors that welcome worshippers and visitors were created by sculptor Robert Graham, who also cast the statue of Our Lady of the Angels who watches over from above. Inside, alabaster windows provide natural lighting and a massive alabaster cross sits high above the altar. In the Crypt Mausoleum downstairs, visitors discover the brilliant stained-glass windows from St. Vibiana Cathedral, the city’s previous cathedral, built in 1876 and irreparably damaged in the 1994 earthquake.

Recommended for Sightseeing because: One of the city’s most beautiful structures, the cathedral is a modern marvel of architectural innovation.

Jenny’s expert tip: Go downstairs to the lower level, where the Crypt Mausoleum of the Cathedral of Our Lady of the Angels is located to discover the crypt of actor Gregory Peck.

Read more about Cathedral of Our Lady of the Angels → 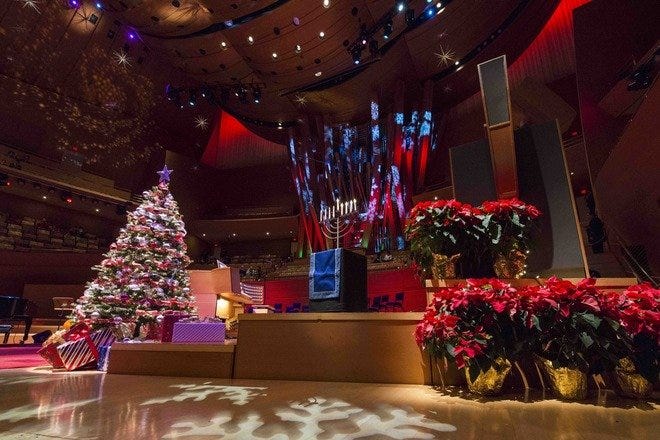 Designed by famed architect Frank Gehry and completed in 2003, the Walt Disney Concert Hall is a stainless-steel marvel with transcendent acoustics in the grand, vineyard-seating designed auditorium. Created to evoke a ship at sail, the hall features a impressive curved, wooden pipe organ that Gehry also designed. The home of the L.A. Philharmonic, which performs classical music throughout its annual season, the hall also offers many different musical events throughout the year, including performances by the Los Angeles Master Chorale and the American Youth Symphony. Self-guided audio tours are offered daily, but in order to see the main auditorium, you must purchase a ticket to one of the shows.

Recommended for Sightseeing because: A world-class architectural wonder, the Concert Hall’s beauty is awe inspiring when seen up close.

Jenny’s expert tip: Go across the street to dine at The Grand, where Jose Andres has three restaurants. 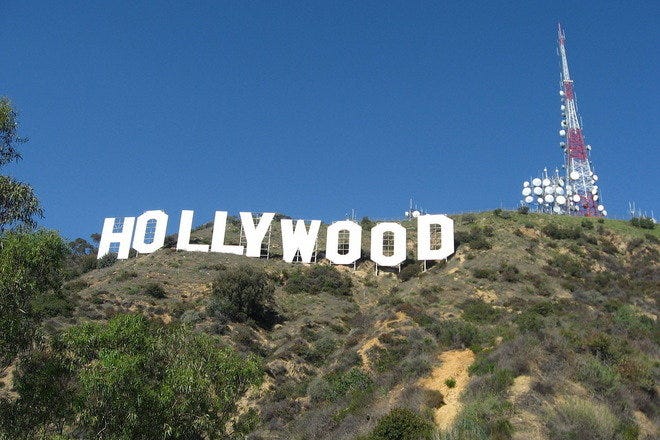 There’s nothing quite like seeing the Hollywood Sign to let you know you’ve arrived in L.A. Built in 1923 as a real-estate advertisement, the sign originally read “Hollywoodland,” but the last four letters were dropped in 1945. In 1978, the sign received much-needed repairs, and today it stands as one of the movie capital’s best-known calling cards. Located on Mount Lee in Griffith Park, the sign is now closely protected, so do not expect to get very close. Hike up to the fenced-in area behind the sign via trails in Griffith Park; or just go to the observatory for a great view. Or go to 7036 Mulholland Drive, where the Hollywood Bowl Scenic Overlook gives you a wonderful view of the sign, as well as that beautiful outdoor concert hall.

Recommended for Sightseeing because: The ultimate symbol of Los Angeles, the Hollywood Sign has beckoned visitors to Tinseltown since 1923.

Jenny’s expert tip: Take a guided horseback ride with Sunset Ranch on Beachwood Drive for a terrific view of the sign – and the city below as well. 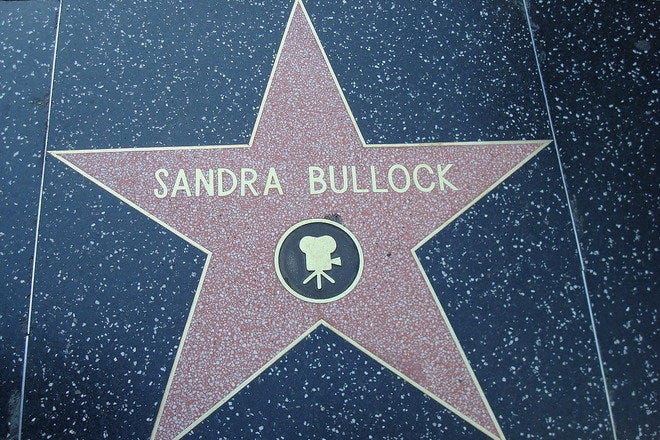 Located along Hollywood Boulevard from Gower to La Brea and on Vine Street from Yucca to Sunset, the Hollywood Walk of Fame began in 1958 when the first eight honorees (including Burt Lancaster, Joanne Woodward and Preston Sturges) got sidewalk stars placed at the corner of Hollywood and Highland. Since then, more than 2,500 people have been honored with one of the terrazzo and brass stars. Each star indicates the individual’s area of specialty with one of five symbols: a motion-picture camera, a radio microphone, a television set, a record or a theatrical mask. Look for many near the Chinese Theatre, the Egyptian Theatre and El Capitan Theatre, three of the iconic sightseeing spots to also check out along Hollywood Boulevard.

Recommended for Sightseeing because: An integral part of the Hollywood experience, the Walk of Fame is a fascinating way to see the stars as you stroll.

Jenny’s expert tip: Look up the exact spot of your favorite celebrity’s star on the Hollywood Walk of Fame website at walkoffame.com before heading out to find it. 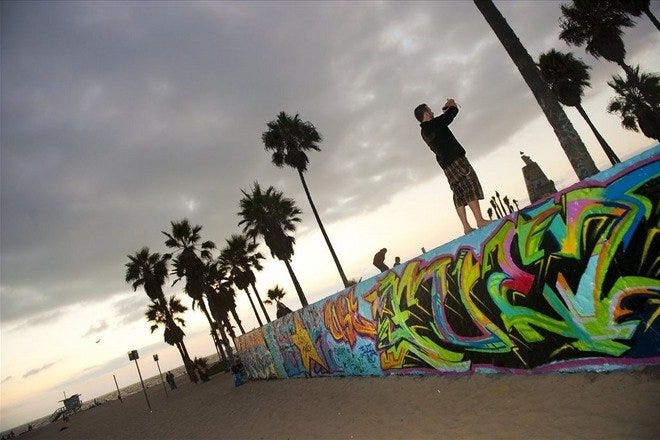 Venice Beach isn’t quite sure what it is, but it sure is interesting. The boardwalk stretches from Venice Boulevard north to Navy Street, with Muscle Beach, the basketball courts and skate park to the south and many of the head shops, surfboard rental places, boutiques and restaurants scattered along the way. You’ll see guys juggling running chainsaws, people gathered in drum circles, even Hari Krishna followers parading with elephants now and then. It’s a sea of people on the weekends, so be prepared for a crowd; wander off the beach toward Abbot Kinney Boulevard where chic art galleries, shops and top-notch restaurants await. Keep going north on the beach and you’ll find Santa Monica’s pier, where you can find the famous Ferris wheel, an amusement park and restaurants. Or just grab a towel and take a swim, but be prepared: the Pacific Ocean is never really warm here.

Recommended for Sightseeing because: Over 16 million people come to see Venice Beach every year; it ranks as the number one sightseeing spot in Los Angeles!

Jenny’s expert tip: Rent a bicycle or a pair of roller skates and cruise along the Venice Boardwalk (it is made of cement) just like the locals do, then keep heading north to hit the Santa Monica Pier, too.