On a spring Wednesday at St. Mark United Methodist Church in South Los Angeles, volunteers huddle around tables, organizing bulk boxes of pantry items for the Wednesday pick-up. Rev. Gary Bernard Williams and Labrenda Joyce Parker, one of his congregants, walk down a long hallway, past a nursery, a classroom-turned-supply-center, and the food pantry.

The pair walk briskly through the kitchen, out onto the driveway, and turn a corner. In an adjacent lot, they find themselves in the Prayer and Produce garden. Williams first envisioned this garden two years ago as a means to supplement the Wednesday food pantry donations. Planting boxes line a small section of land, bordering a spiral and cross. Whatever grows in the garden, Williams gives away.

In South Los Angeles, liquor stores outnumber grocery stores, according to the Los Angeles Food Policy Council. Residents face the lowest supermarket-to-person ratio of any Los Angeles region: For every 9,025 people, there is one store. And while in every neighborhood people suffer from diet-related illnesses, in South Los Angeles, people are twice as likely to be diagnosed with diabetes.

Williams describes the uneven supply of healthy food as an apartheid system, where food is more accessible to affluent white communities than low-income communities of color. Residents have little or no access to produce fresh and healthy foods at the store and, instead, there is an excess of fast-food chains.

These are the facts that drive Williams’ fight for food justice. He is a leader in the city, using food sovereignty—the simple idea that all people should have the right to define their food systems—to address food insecurity that has existed for decades, if not centuries; the problem was aggravated by the COVID-19 pandemic and sustained by economic uncertainty. 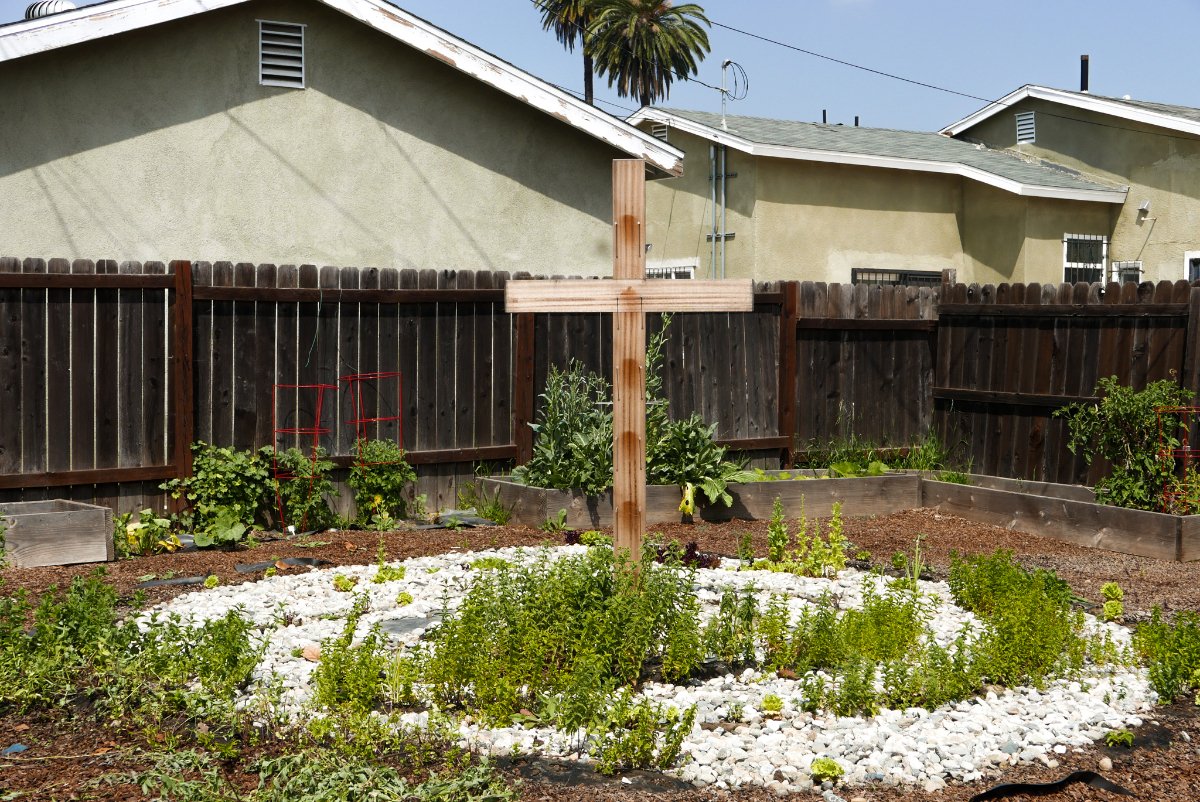 The church garden at St Mark’s is small but mighty. It has helped supplement food pantry donations for two summers now.

Then, last year, Williams started noticing something else. In different pockets of Los Angeles, the ones where fast-food chains are abundant and tree coverage scarce, grocery stores were disappearing. First, the Food4Less in East Hollywood shuttered its doors for good. The Ralph’s in Pico-Roberston followed. And then another Ralph’s, just two miles from St. Mark’s, closed, leaving one name-brand supermarket—a different Ralph’s—within a 2-mile radius of the church.

Ralph’s parent company, the Ohio-based grocery chain Kroger, closed the supermarkets over the “hero pay” mandate that required businesses to pay employees an extra $5 an hour in response to pandemic workplace conditions. Two of the three stores were in South Los Angeles. The company claimed the three stores were performing poorly. Meanwhile, Kroger’s profits increased by more than 5 percent that year.

“We don’t have enough supermarkets in our communities, but every time you look around, there’s a new 7-Eleven,” Williams said. “I could probably count 10 7-Elevens within a five-mile radius of this church.”

It was the pandemic, however, that caused him to act. “I believe God gave me this vision of creating gardens,” he said.

So St. Mark’s partnered with Jennifer Oliver, a food scientist and ordained minister, to create a garden that could meet the community’s needs.

Now, Williams and Oliver are in the process of creating a model for other churches and religious organizations across the United States to copy. The first step was the church garden, where vegetables are used to supplement food pantry donations. The next step is turning a 9,500-square-foot piece of United Methodist Church land into an urban farm that will act as a new arm of the church.

“I see this as a sustainable way of redefining the church,” Williams said.

Churches are at the hearts of many communities and are uniquely positioned to turn their land into space to grow food because they have the organizational power and a history of feeding those in need. Williams had the space on the church’s grounds to grow food, so he did.

Back in May, Parker pointed to the vestiges of last year’s planting: Lettuces and mint grew out of grow bags in the garden’s center. Meanwhile, along the perimeter, new planting had begun, with tomatoes climbing on wire frames next to carrots and spinach. Two years ago, soil testing revealed to Williams and his team that the ground was too toxic to plant in—it is riddled with the remnants of pesticides—so everything is planted instead in sacs made from natural materials. But, in one corner of the garden, new zucchini grows in dirt produced by the garden’s compost.

At the garden’s center, a spiral of lettuces and gravel leads to a cross. In addition to providing fresh produce, the garden was designed to be a space for meditation.

Parker, a retired state employee, was inspired by Williams’ vision and began learning as a volunteer. Now, she runs the garden with one other volunteer, which involves weeding, planting, harvesting, and maintaining the space. One of the biggest challenges Williams has encountered is finding people willing to participate in the garden process, but Parker has taken on this ambitious role with vigor.