But the simple, boxy apartment buildings have become as beloved as they are loathed, and are as common as palm trees and parking garages to the Los Angeles landscape.

Dingbats took over during the development-driven era of the 1950s, many replacing craftsman bungalows and single-family Victorian homes–they offered inexpensive rents and living spaces.

This icon of Los Angeles architecture emerged during the city’s postwar expansion period, and “enabled the sprawl for which LA is infamous while simultaneously creating a consistency of urban density achieved by few other cities,” according to the Los Angeles Forum for Architecture and Urban Design , which is releasing a book on the buildings following a successful Kickstarter campaign. This won’t be the first book to give ink to the temples of residential kitsch, there’s another called Pretty Vacant: The Los Angeles Dingbat Observed. (And one person has even started documenting the remaining dingbats on Instagram.)

Structurally, they are “half parking structure, half dumb box,” and not exactly the most stable in an area that gets a fair amount of earthquakes, as it turns out. They do have at least one native attribute, though, they highlight LA’s car culture–“Like the strip mall, the dingbat capitalized on Angelenos’ romance with the automobile,” noted Architizer’s Lamar Anderson, “The format is essentially an inhabitable parking structure .”

Dingbats were not named so until the 1970s, decades after the first was built–“the first textual reference to the term ‘dingbat’ was made by Reyner Banham in Los Angeles: The Architecture of Four Ecologies (1971). He credits the coining to architect Francis Ventre,” who described them as exhibiting “the basic characteristics of primitive modern architecture. Round the back, away from the public gaze, they display simple rectangular forms and flush smooth surfaces, skinny steel columns and simple boxed balconies, and extensive overhangs to shelter four or five cars.” There are variations on this setup, but most dingbats are designed as Ventre described.

Sure, they’re cheaply constructed glorified garages with thin walls… but they have an undeniable retro charm, and the way their names are spelled out in specialized fonts on the front facade adds a bit of personality, becoming their most defining feature. “Like starlets striving to be noticed, many announce their names in whimsical midcentury script,” Anderson pointed out. “Their signature embellishment is usually a star, diamond, or other geometric flourish.” They are cookie cutters with a little bit of flair. 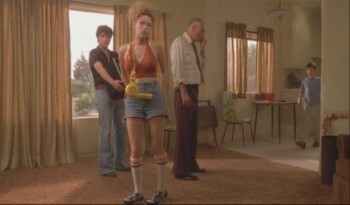 In the 1990s, they created a depressing backdrop in Slums of Beverly Hills–screenwriter Tamara Jenkins once noted, “Those dingbats are so poignant. So beautiful and heartbreaking. Little temporary homes for the underclass like tenements with fanciful aspirational names extravagantly drawn on the front like hotels. They break my heart, those buildings.” This was spoken more concisely through character Vivian Abramowitz (played by Natasha Lyonne), who declared in the movie that dingbats were “two-story apartment buildings featuring cheap rent and fancy names that promise the good life, but never deliver.” The movie was set in the mid-1970s, when the con was up and the carpeting was worn in.

Last year, Joshua Stein dug into the dingbats as seen through the movie, noting they seem “oddly appropriate for millennial Los Angeles. More than a simple retro aesthetic, this patina of the passé that coats all surfaces of slums seems an all-too- accurate depiction of a large portion of the present housing stock of Los Angeles.”

Currently, dingbats that have been better kept up, or renovated, are about on par with regular apartment rents–here’s one in Santa Monica for $1950/mo, and another in West LA for $1850 (both 1 bedrooms). Some neighborhoods have more than others, but you can find them just about everywhere, from Santa Monica to Los Feliz–for now, at least. Dingbats are slowly vanishing, being “demolished by the dozen to make way for multi-story complexes with underground parking,” Mark Frauenfelder noted in 1999. Well, they aren’t all keepers, but maybe some of them are worth keeping.

Tabitha Brown to Open Her First Vegan Restaurant in LA