You could call it a business founded on the enchilada and saved by the margarita. You could easily call it a Los Angeles institution. But more than anything, after 100 years, El Cholo is a family affair.

At 89, Ron Salisbury presides — as he has since 1954 — over the venerable Mexican restaurant opened by his immigrant grandparents. Lineage is evident among the staff, too. The head chef at the flagship Western Avenue location, Gerardo Ochoa, started as a dishwasher 27 years ago. His brother Sergio, a 40-year veteran, runs the kitchen at the downtown location; their father, Ignacio, was an El Cholo line cook in the 1970s and ’80s before going home to Michoacán, Mexico.

And in an industry known for turnover, 54 employees — more than 1 in 10 across the restaurant’s several locations — have been with the place for 20 years or more.

Their collective memory has been essential to perpetuating the traditions and the tastes that have made El Cholo a destination for celebrities, college students and generations of Southern California families.

“It’s just passed on,” Salisbury said of the restaurant’s ethos as he surveyed the 280-seat dining room on a recent morning, the kitchen crew already hours into its sauce-making and other tasks. “They have a recipe book there, but they don’t pay attention to the recipe book. They know the nuances.”

In many ways, El Cholo mirrors the evolution of Americans’ tastes in Mexican foodincorporating a wider range of dishes that has become familiar (or even originated) north of the border.

But the cooking is still based on his grandmother’s recipes, Salisbury said, and there is one guiding principle for every dish, including those added or modified over the decades to reflect changing tastes: “Is it true to what she would have done, and up to her standards?” 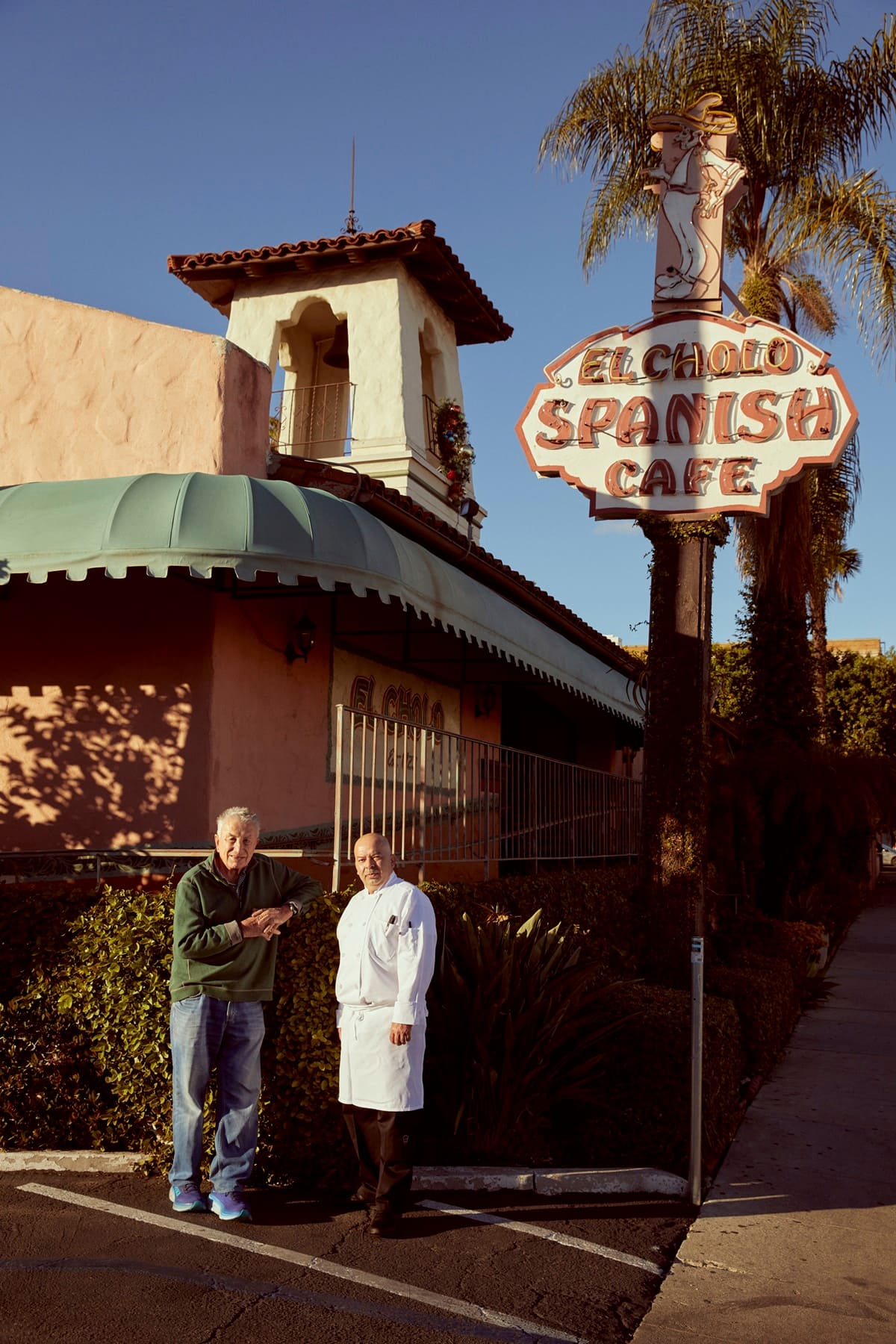 Salisbury is no cook. But he was practically raised in the restaurant.

Its roots were planted in 1923 by his grandparents, Alejandro and Rosa Borquez, at a small location — now long gone — near the Los Angeles Memorial Coliseum, which also opened that year. They called it Sonora Café after their native state, and then, in 1925, El Cholo.

Their daughter Aurelia and her husband, George Salisbury, whom she had met while waiting on his table, soon opened a five-booth, 12-stool Western Avenue branch — closer to the emerging Hollywood studios and the upscale Hancock Park neighborhood. It moved across the street into its current location, a converted two-bedroom bungalow, in 1931. The front bedroom became the cramped waiting room, familiar to legions of heel-cooling diners in the decades when the restaurant took no reservations.

Two years later, Ron Salisbury was born. “My mother taught me how to count by counting coins in the register,” he recalled.

He moved on to kitchen chores after school and during summers — taking seeds out of chiles, assembling tamales, sorting dishes to be washed. When he was 18, his father had him manage the place for a day. Three years later, just out of college, he was running it full time.

“My father was never really comfortable with the restaurant business,” he said. For himself, in contrast, “it seemed very natural.”

Even for a restaurant defined by family tradition, keeping a dining business thriving from 1954 to 2023 has been a labor not of preservation, but of innovation.

Take, for example, El Cholo’s signature enchilada sauce. For Angelenos in 1923, “spicy foods were not the norm,” Salisbury said, and the sauce was calibrated accordingly.

But over the last century, the American Palate has become more adventurous. “So without endangering too much,” he said, “we added a little more chile” — so little that “maybe you’re not going to notice it, and I felt I was tampering with something sacred.”

A menu that long featured just a few entries — like enchiladas, chili con carne, tamales, a combination plate adding rice and beans — has gradually expanded and now, in encyclopedic fashion, features the date when each dish was introduced (chimichangas, 1967; crab meat enchiladas, 1971).

Nachos were added by stealth, the initiative of a longtime server, Carmen Rocha, whose knowledge of the dish followed her from Texas when she joined El Cholo in 1959. She started preparing nachos for the diners in the room she served, and they shortly became a standard.

A fraught decision came in the late 1960s when the margarita was becoming a popular drink. George Salisbury had limited the alcohol offerings to beer and wine. “He felt serving hard alcohol was just asking for problems,” his son recalled.

Ron Salisbury added a margarita that he admits was not very good until a fellow restaurant owner offered a few tips. The result — involving a blend of tequilas, the details a rare point on which a collection of El Cholo recipes and lore is coy — was a watershed moment.

“If we hadn’t had margaritas,” Salisbury said, “I doubt we’d still be here.”

In the decades since, El Cholo has flourished and honed its image as a constant in a centrifugal city. Walls are adorned with photos recalling its heritage — the family origins, the longtime chefs and Sservers, the evolving menus and a cavalcade of celebrities and athletes. In a photo from El Cholo, waiters at the restaurant in the 1930s, when the nearby Hollywood studios were booming. (El Cholo via The New York Times)

“Business right now has never been better, really good,” he said. But there are plenty of challenges. The pandemic, which reduced operations for many months to takeout service, left a shortage of employees to handle the demand when diners returned in force. (Although the main location’s kitchen had 44 people before the pandemic, it now has 23. “We’re running faster,” said Gerardo Ochoa, the head chef.) Inflation has put pressure on costs and, in turn, on menu prices. Fears of a recession loom.

All the same, Salisbury remains focused on the future. The youngest of his seven children, Brendon, 34, will eventually take over, he said. (Another son, Blair, owns and operates an El Cholo in Pasadena that is independent of the six other locations.)