Drive by Sea Harbor in Rosemead on a weekend and there are almost always droves of people waiting outside to snag a table for dim sum. Customers mill around two rooster statues flanking the sides of the massive standalone building, waiting patiently, sometimes for hours, for plates of shu mai, har gow, steaming congee bowls, and shrimp-studded rice noodle rolls. The scene has been a familiar one for over two decades now, despite the plethora of dim sum options in the San Gabriel Valley.

The secret to Sea Harbour’s success has a lot to do with the ingenuity of its 57-year-old owner, Hui Dong “Tony” He. A chef who’s been in the industry since the early 1980s, over the last couple of years, he has opened two new Chef Tony sister restaurants in Arcadia and Pasadena, which offer more casual, new-school takes on dim sum than Sea Harbor’s more traditional Cantonese fare.

Since it opened in 2001, Sea Harbor has established itself as an institution. Even the roosters out front have become something of a landmark — diners, including myself, often tell friends and family to meet at the “dim sum place with the roosters.”

“Back when I owned a restaurant in Zhongshan (a city in China’s Guangdong province), it was famous for a salt-marinated chicken dinner dish, something that was big in China at the time,” says He in Mandarin through a translator. “That’s why I got the roosters.” The updated version of that dish he now serves at Sea Harbor comes as tender chicken slices punctuated with truffles.

Sea Harbor hearkens back to the Chinese palaces that dotted the San Gabriel Valley for decades. Over the last few years, several of these old-school dim sum spots have closed, including Ocean Star, Empress Harbor Seafood Restaurant, Lincoln Seafood, and King Hua. In 2019, David Chan, an LA-based Chinese food enthusiast and blogger, suggested to the Los Angeles Times that the change was a byproduct of Cantonese food losing its popularity as Sichuan and hot pot restaurants were gaining steam. “Over the last two years, do you know how many [new restaurant openings] are Cantonese?” Chan asked. “Ten percent.”

There are no dim sum carts at Sea Harbour, which might seem commonplace now, but wasn’t 21 years ago.

There are no dim sum carts at Sea Harbour, which might seem commonplace now, but wasn’t 21 years ago when the restaurant was among the first in the area to ditch the carts in exchange for ordering off a menu. He initially implemented the practice at his second Sea Harbor restaurant in Vancouver 25 years ago (his first location was in Zhongshan) to make the food fresher for customers. Items were made-to-order, coming out to the tables hot, instead of sitting for long stretches in the push carts. All the restaurant’s dim sum items are also made by hand daily. 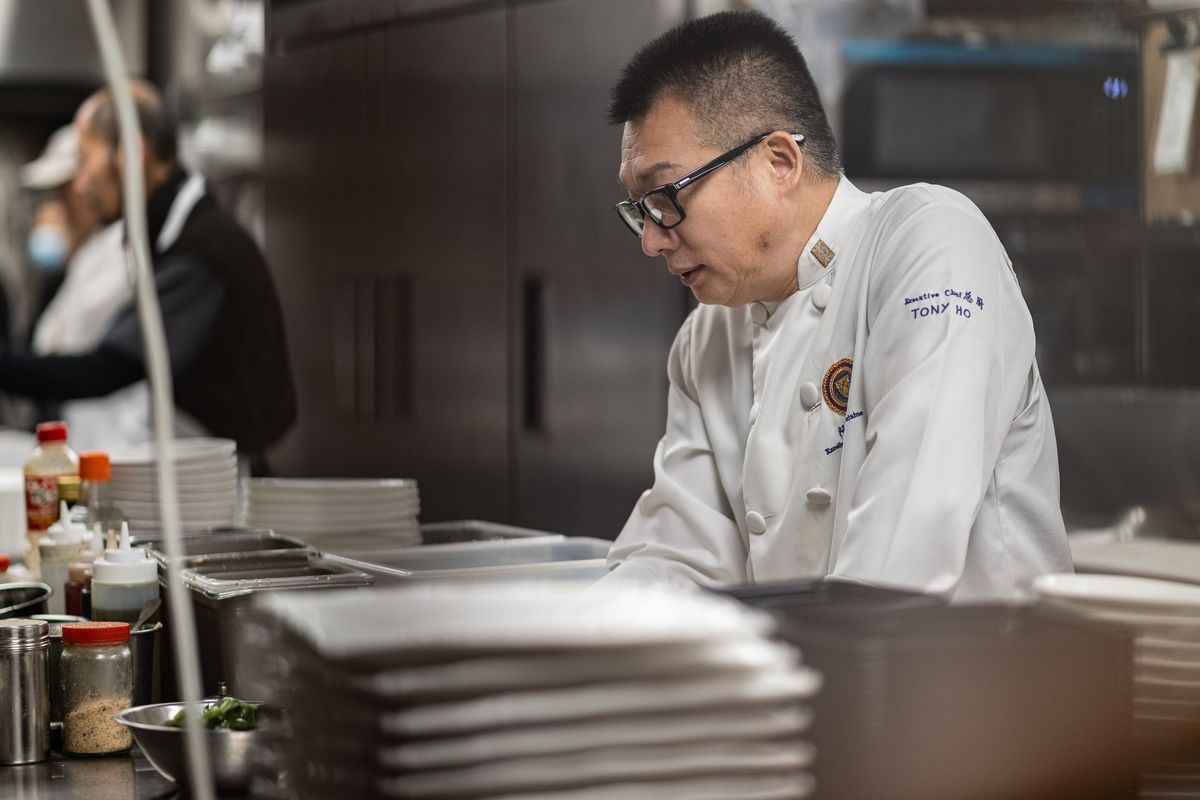 Tony He inside the kitchen at Sea Harbour.

“A lot of my restaurant industry friends and colleagues didn’t think I’d be successful [in getting rid of dim sum carts] because it didn’t seem possible then,” says He. “I felt like it would be a huge opportunity for me to innovate and explore this new area. I did it and it was successful.”

He claims to have invented a number of popular dim sum dishes found on menus around the world, like truffle-sauce-topped har gow, a black squid ink shrimp dumpling brushed with gold leaf, and a squid ink bun with salted-egg lava also adorned with gold. He says he was inspired by his travels to Italy and incorporated these ingredients and techniques. Even today, when he has a new idea he works with his bosses to bring them to fruition. “I always add new items to my menu, sometimes every other month,” says He.

He claims to have invented a number of popular dim sum dishes found on menus around the world.

It’s not clear exactly when the truffle har gow first debuted, though in 2017, the item was on the menus of both Sea Harbor and Hong Kong restaurant Dim Sum Library. Other squid ink dishes seem to have made early appearances at other restaurants around the world beginning in 2015 without clear attribution to He’s restaurants. He doesn’t recall the exact dates of his items dropped at his Sea Harbor locations in Vancouver and LA.

Dim sum isn’t the only draw to Sea Harbour. The restaurant is also known for its crispy and tender deep-fried squab, influenced by the popular dish from his native Zhongshan. He says while most squab served at restaurants have been raised until they’re 30 days old, his are two weeks old at most, resulting in a tenderer meat. And instead of marinating his squab in brine or broth, He opts for a dry rub before deep-frying them. 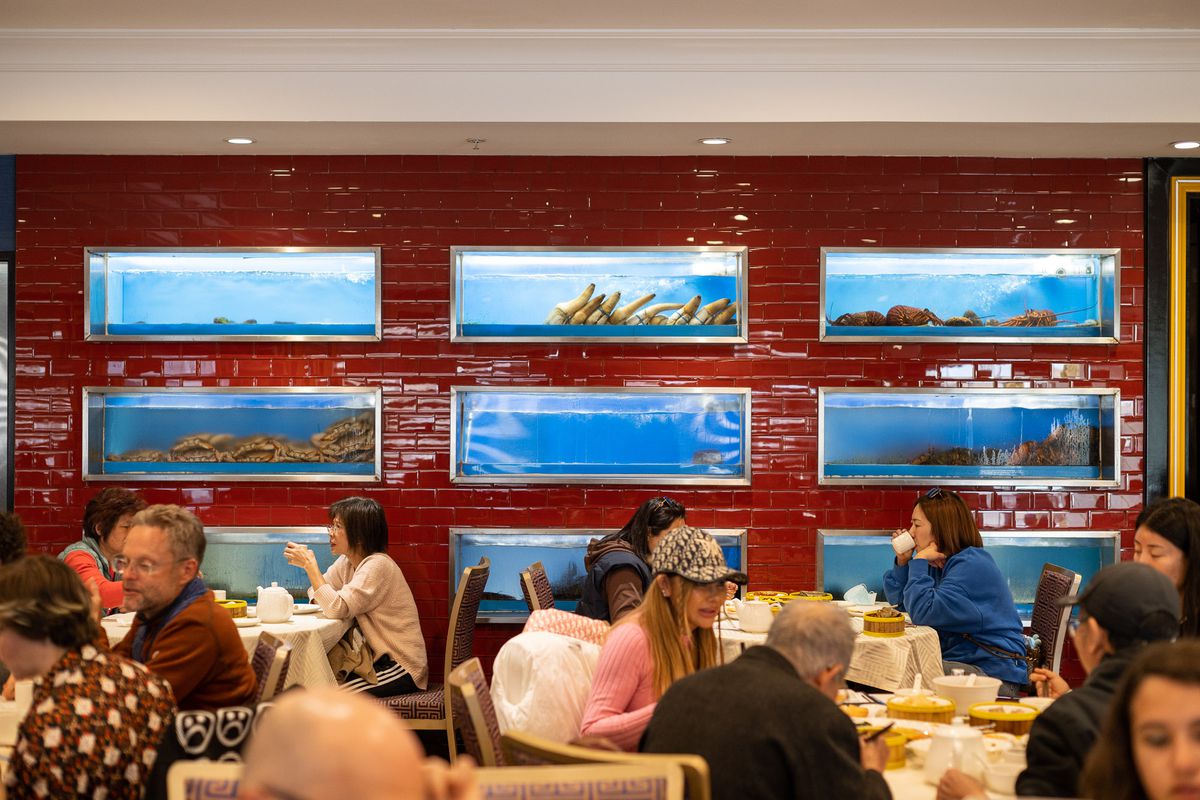 Diners sit in front of the live fish tanks at Sea Harbour. 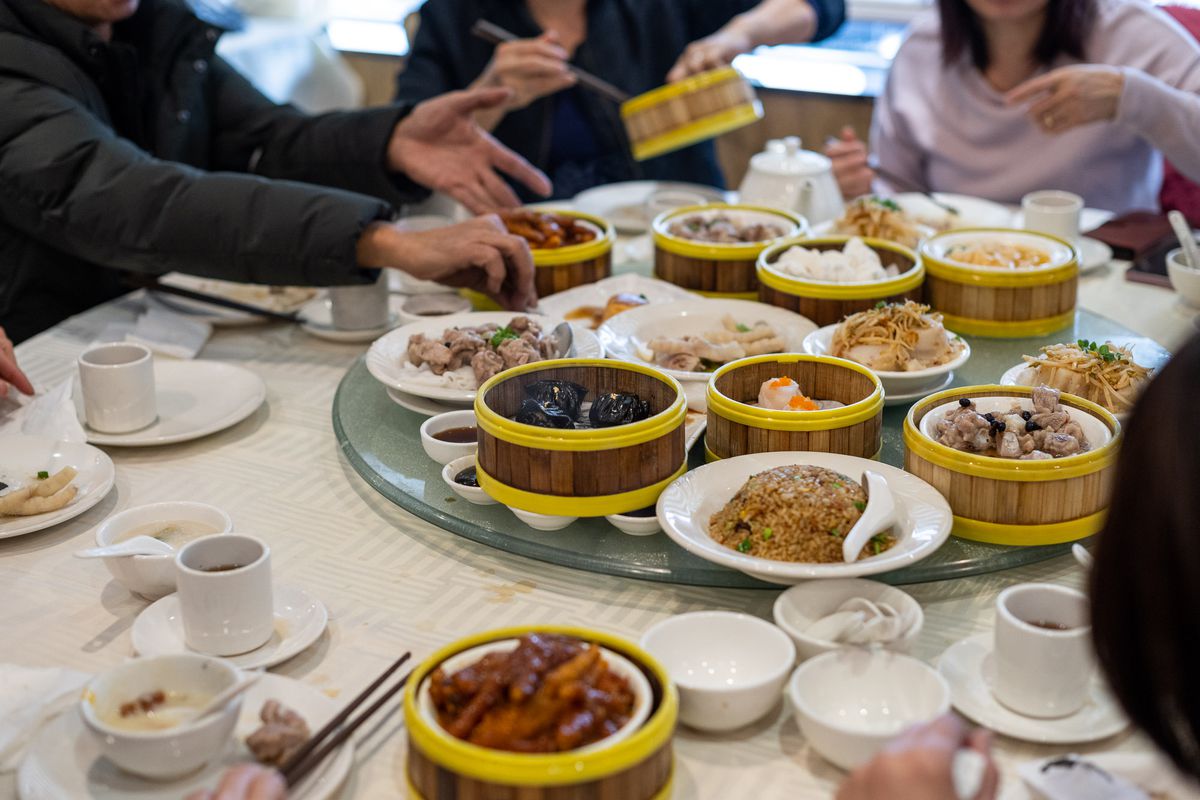 One of Sea Harbour’s other popular specialties is its abalone. In 2001, he trained under renowned Chinese chef Yeung Koon-yat, known as the “abalone king.” He implements a laborious process of hydrating dried abalone into an umami-laden seafood dish. It requires soaking, cleaning, and boiling with deep-fried chicken and pork belly for days to get the perfect texture and flavor profile. While most customers can get Sea Harbour’s South African abalone for $268, the high rollers who really know what abalone is about will pay thousands for higher-grade ones from Japan.

The success of his Chef Tony restaurants has convinced him to open two more locations in Irvine and Las Vegas in 2023.

Since the beginning of the pandemic nearly three years ago, dinner service at Sea Harbor has been on hiatus, but there are plans to relaunch it by Lunar New Year — January 22. He says this pause has allowed him to update his kitchen equipment at Sea Harbour, which serves as a central kitchen for the Chef Tony outposts.

He’s tenacity might have something to do with the work ethic required to become a self-made restaurateur. After starting his cooking career in Zhongshan at 15, he left six years later, switching careers entirely and selling TVs. He returned to the industry and opened the first Sea Harbor in Zhongshan in 1992, a location he later closed as China’s government changed and began adding more stringent rules for restaurateurs, like a higher taxation system. He immigrated to Canada in 1996, opening his second Sea Harbor outpost in Vancouver.

It’s been a long journey for He, and it’s not over yet. The success of his Chef Tony restaurants has convinced him to open two more locations in Irvine and Las Vegas in 2023.

“There are so many restaurants who have been copying my concepts and ideas, and I actually feel like this is a happy thing, an honor because that means I’m doing well and people want to copy me,” says He. “If one day I have to copy other restaurants or other people’s food, then I need to think about what am I doing wrong with my restaurant.” 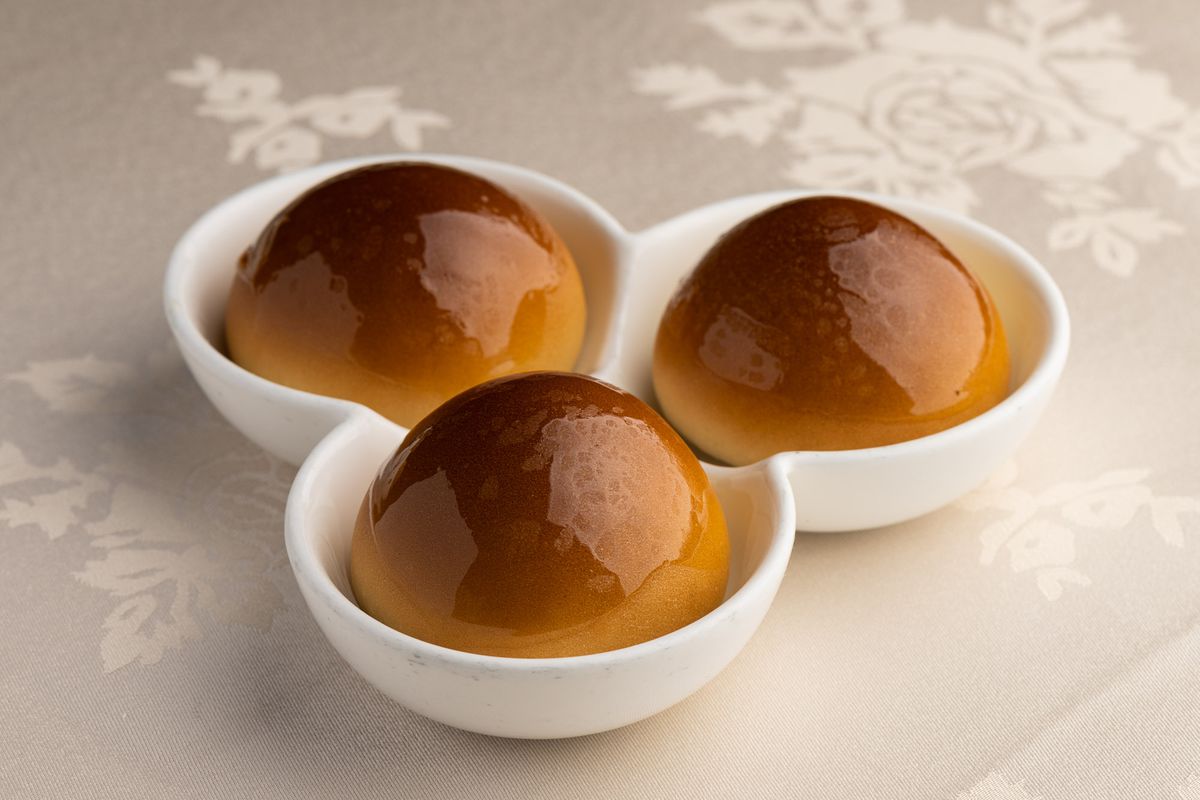 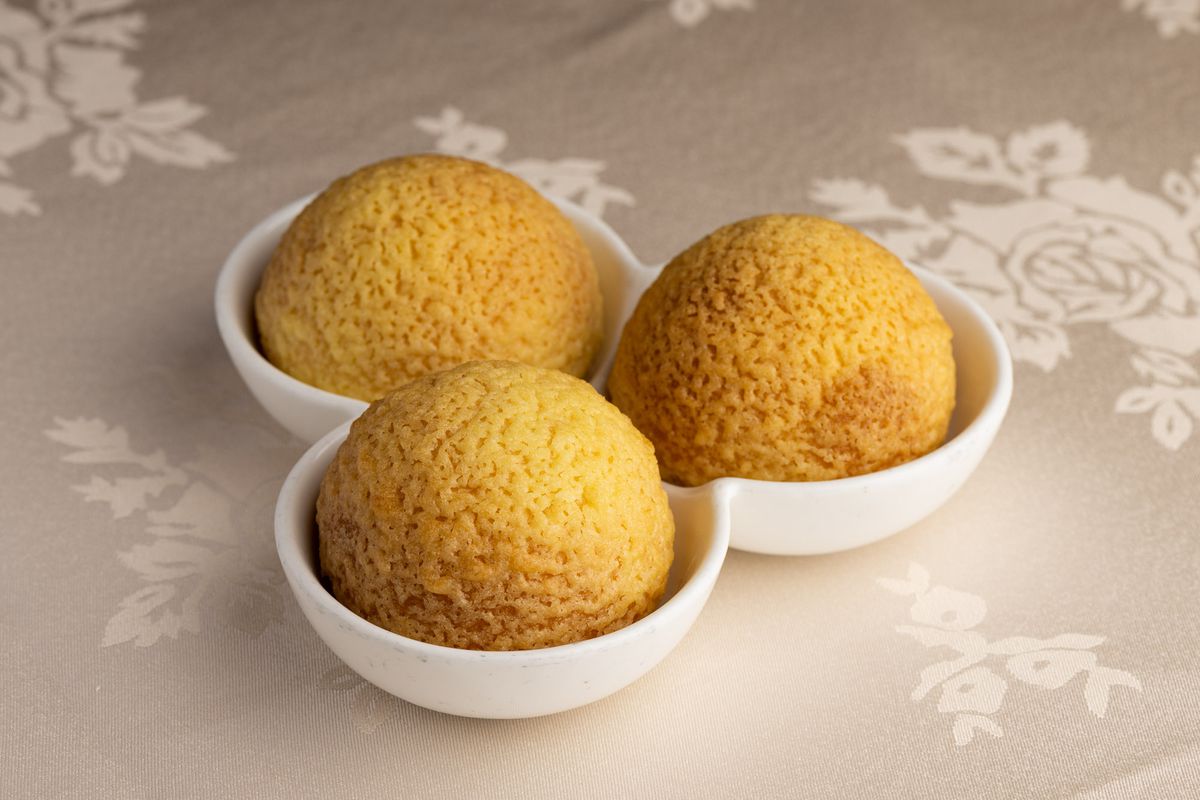 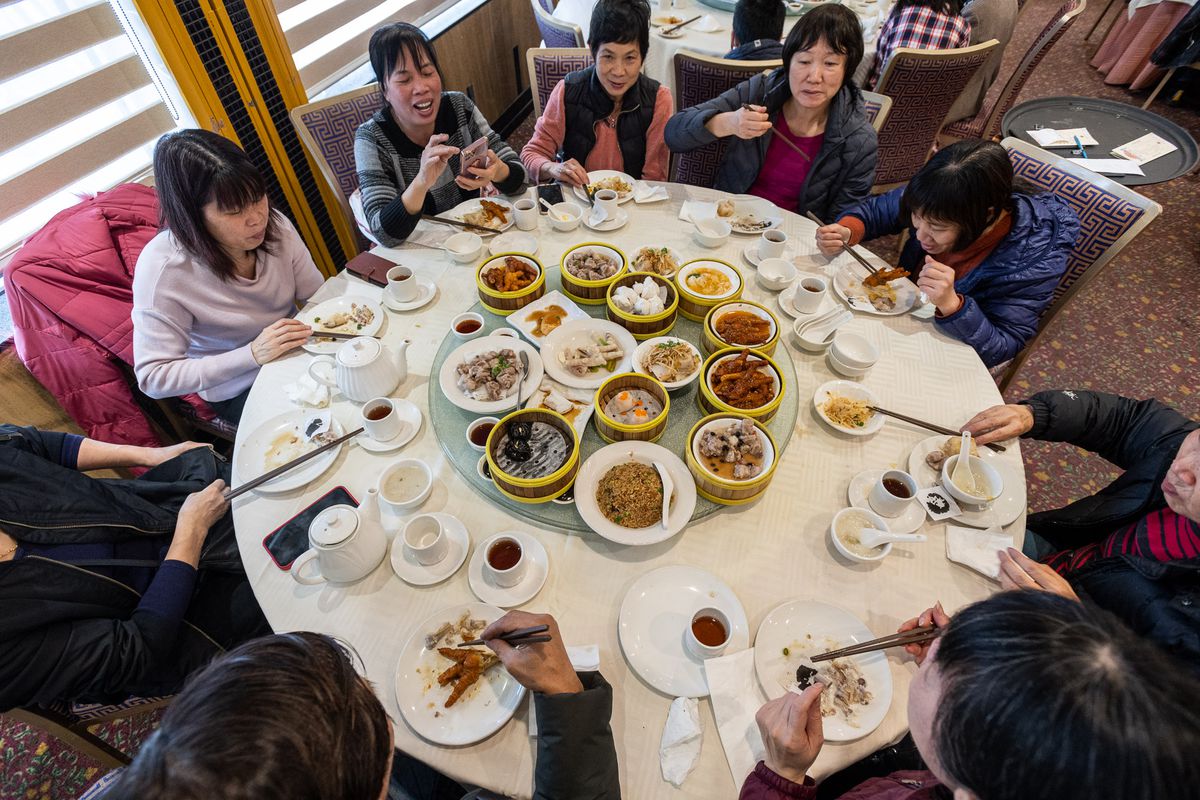 A busy dim sum table at Sea Harbor on a weekend. 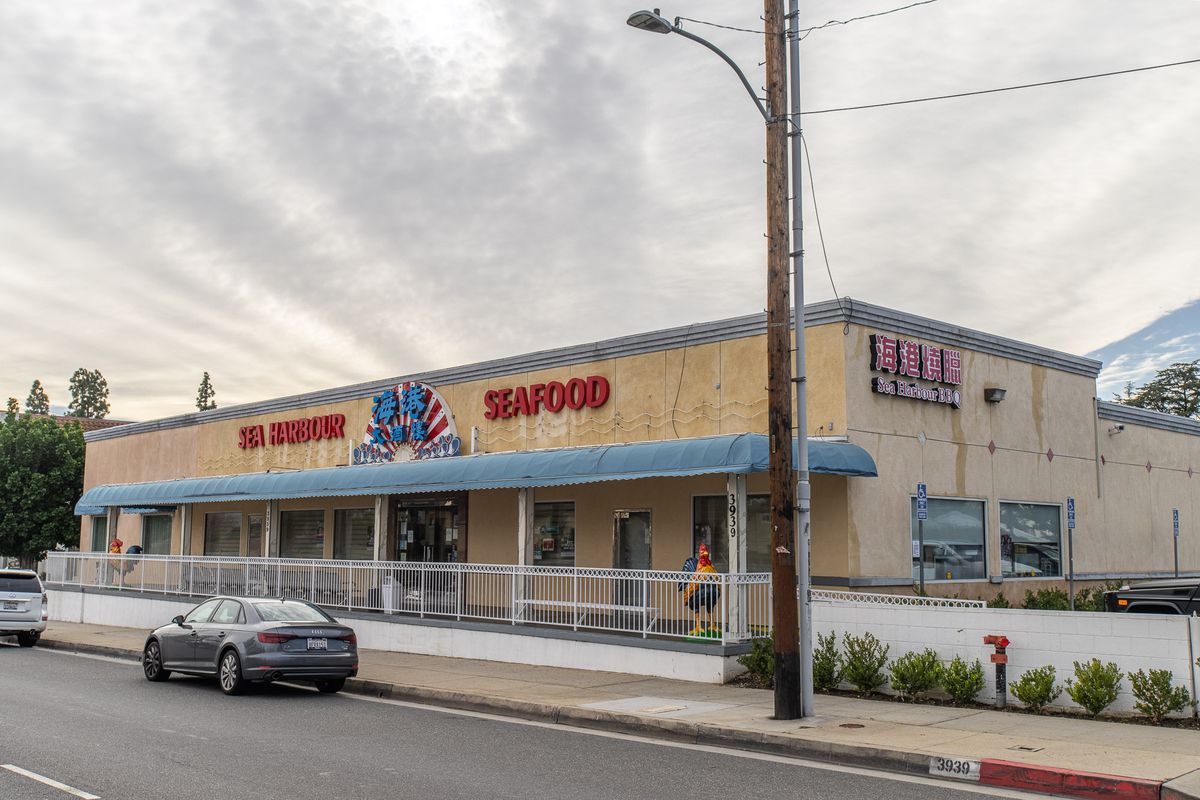